I have a good looking crop of Swiss chard growing in my garden so it’s time to make something with them.  I am combining the Swish chard with onion and radish.  The radish gives it a little kick.

In a skillet over medium heat melt the coconut oil then add the red pepper flakes, onions and radishes and stir until the onion softens.  Add the Swiss chard and cook, turning often until the chard starts to wilt.  Season with salt and pepper.

Due to a mistake at the nursery where I purchased my beets that I planted I got what looks to be a golden beet instead of the typical red one.  This lighter color beet is more of a mild flavor and is very good raw in a salad.  So I thought I would sauteed some and see what happens.  I was pleasantly surprised.

Heat the oil in a large skillet and add the beets.  Cook for a couple of minutes.  Add the Swiss chard and cook till wilted.  Season with salt and pepper and serve.

The Swish chard comes from my garden as do the beet greens.  When you have your own garden you will always know that you are getting the freshest ingredients that have no chemicals that can harm you.

You have to clean your leeks very carefully.  I slice the leeks and then separate into rings and put them in a bowl of water.  Let them stay in the water for about ten minutes.  Swish the leeks around a few times.  This allows the dirt on the leeks to fall to the bottom of the bowl.  Remove the leeks from the water and let them dry on a paper towel.

1 large bunch of Swiss chard, remove the rib and chop (from my garden)

1 bunch of beet greens, chopped (I used the tops from my golden beets)

Add the swish chard and beet greens, season with salt and pepper.  Stir often to combine and cook until the greens begin to wilt.  Top with the bacon and serve.

I took a look at my garden this morning and decided to combine the two ingredients that are ready to be picked in the same dish.  What is great about having your own garden is being able to trust the food you prepare.  You know exactly how it has been treated. 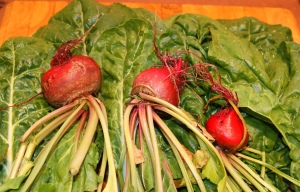 Wrap the beets in foil and roast them  in a 350 oven until they are tender.  Let the beets cool then peel and chop the beets into bite size pieces.

In a skillet over medium heat melt the coconut oil then add the red pepper flakes and stir.  Add the Swiss chard and cook, turning often until the chard starts to wilt.  Add the beets and cook for about one minute.  Add walnuts and serve.

Today was the time to clean out the refrigerator and look what I made.  You can leave out the chicken to make this vegetarian.

Salt and pepper to taste 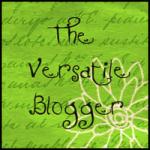